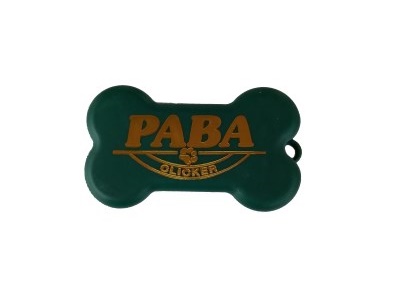 HOW TO CLICKER TRAIN YOUR DOG

In recent years traditional methods of training dogs with devices that inflict pain or punish such as the choke collar have been undergoing increasing scrutiny. The dog is the only animal that is training through choking. It is well documented in the scientific literature that there are accepted principles of learning which if used and applied properly will make the training of animals of all species, including dogs, easier and more efficient.

Any behavior is more likely to reoccur if it is followed immediately (within a second) by a rewarding stimulus. The difficulty, of course, is to deliver the reward quickly enough for the animal to relate it to the behavior just performed, particularly if the behavior you are training is occurring at some distance away from you. Dog trainers had to look at the training of other species to see how these problems can be overcome. Trainers of aquatic mammals (whales, dolphins) and wild carnivores (tigers, bears) have done admirable jobs without the use of choke collars or other punishing devices. They use reward to reinforce the desired behaviors being taught and ignore undesired behavior’s. They have overcome the difficulty of quick delivery by introducing to the animal conditioned or secondary reinforcers. First, however, we must understand what a primary or unconditioned reinforcer is.

A primary reinforcer (positive reinforcement) is a term, that for our purposes, can be used to mean the same as a reward. A reward is anything that is innately pleasing to an animal and served to increase the strength of response. There are a number of primary reinforcers that immediately come to mind including touch (petting, hug, kiss), voice (praise), scent (perfume, flowers), sight (smile), taste (food) and play (fetch, toy). Many of these may not be as effective as we would like because we use them so freely during daily interactions with our dogs. We obtain pets as companions, to talk to them, pet them and cuddle them. Our voice and touch are always forthcoming so the dog does not have to perform to receive them. Primary reinforcers such as sight and smell are not practical for us to use as training rewards. Taste and play can be very effective primary rewards to use in conditioning or training our dogs. Individual dogs may, however, prefer one over the other. Schnauzers would prefer food. Border Collies would prefer a tennis ball. We suggest that both be used, food during the training session and play at the end of the session or as a break during the training session. Food as a primary reinforcer has the following qualities:

In addition, food can be used as an indicator of the degree of stress that the dog is undergoing. If a dog refuses a tasty treat this is an indication that the dog is in too much stress or anxiety to learn. It is time to stop the training session or interrupt it with a play session. We are often asked how large the food treat should be. Surprisingly it should be very small, 1/2 the size of the tip of your little finger for large dogs (German Shepherds, Golden Retrievers and larger) and correspondingly less for smaller dogs (the size of the head of a wooden match for dogs such as Miniature Poodles and Schnauzers)

When training with primary reinforcers, every correct response should be rewarded until the dog understands the command. Once the command has been learned reinforcement becomes more powerful if it is given intermittently. The learned behavior must be intermittently reinforced with a reward if the dog is to retain it. The reward, once the behavior has been established, does not always have to be food.

A secondary reinforcer is an indicator that some other reinforcer (primary reinforcer) is on its way. It is a method of delaying the reward that is being used to train the animal. Trainers of species of animals other than dogs found that it was most often impossible to be in close enough approximation with the animal (e.g., Killer whale, grizzly bear) to provide a reward within one second in order for the animal to associate it with the behavior it had performed. Through the application of Classical and Operant Conditioning (see reading list) they were able to overcome this difficulty by introducing a conditioned reinforcer to the animal they were training. This was accomplished by pairing a sound (click, whistle etc.) with a food reward. The sound became an indicator that a food reward was going to be given once the association between sound and reward was established, the sound could be elicited at exactly the moment that the correct behavior was given, and from a distance. The animal knows exactly what it was rewarded for. The trainer did not have to be next to the grizzly bear or in the water with the killer whale. It proved to be a very effective and efficient training modality

Get used to the operation and sound of the clicker outside of the presence of your dog, Push and release the springy end of the clicker, that is the end opposite from the metal portion of the dent. The clicker will make a two-toned click. Repeat this several times until you are comfortable with the process and the sound.

INTRODUCING THE CLICKER TO THE DOG:

The sound of the clicker can initially be startling or frightening to your dog. It is wise to slowly introduce this new sound to your dog. The first time you click in the dog’s presence, have the dog at the opposite end of the room you are in, or if your dog is a particularly apprehensive type, in a different room. Gradually bring the dog closer and closer as you click until the dog exhibits no concern over the noise. A slow introduction will prevent untoward reactions and save time in the long haul.

PAIRING THE PRIMARY REINFORCER AND THE CLICKER:

For this exercise you will need your dog, a clicker, tidbits of food and a quiet training area. The food should be highly palatable and something that the dog does not normally have. It is a good idea to identify a type of food that will be used exclusively for clicker training. Types of foods will vary, but most dogs like garlic liver (baked liver liberally seasoned with garlic), cheese, chicken wieners and some dogs love pieces of vegetables. Experiment and find the ones your dog likes best. Remember! Small tidbits! Offer your dog two or three pieces of the food tidbits so that the dog is aware of their presence and availability. Now click and immediately present a tidbit to your dog. Do this several times perhaps a dozen or so. At this point you should have your dog’s rapt attention. It is being treated (rewarded), from the dog’s point of view, for just behaving as it normally would. What could be easier? Now the dog is fixated on watching you and waiting for its next treat. You will now delay clicking until the dog tires of watching you and tums its head and attention to something else. As soon as the dog turns its head “CLICK”! The dog will turn back to look at you. Have a food tidbit ready and give immediately. Again wait until the dog turns its attention away from you and repeat the above process. Do this several times. You will notice that it will begin to take less and less time for the dog to tum its head. The dog will probably turn its head away and then immediately back. Be careful only to click when the dog’s head is turned away. If the dog turns its head away and back so quickly that you don’t have time to click. Don’t worryl Just don’t click and wait until the dog turns its head away again and then click and immediately reward with the tidbit. Congratulations! You have just taught (conditioned) the dog’s first behavior while pairing the clicker and food. (In the dog’s mind it has just taught you to click and reward it every time it turns its head!) This little exercise should only take a few minutes. If you like the behavior and want to keep it, you can now put it on command. You can make it to be part of a cutesy little trick. The dog can be sitting or standing at “attention” and on your command of “EYES LEFT” or “EYES RIGHT” (depending on which way the dog turns its head). The dog will appear to be responding to a drill sergeant’s command. To put the behavior on command you have to proceed as above until the dog is freely turning its head to elicit the click and food reward. As soon as the dog starts to turn its head, introduce the command “EYES LEFT” then “CLICK” then “REWARD”. Repeat until the dog will perform the behavior on command. It is important to remember that the clicker is not a command, but an indicator that a reward is going to be presented.

An animal can be taught to do anything that it is physically capable of by applying the principles of learning correctly. It is, however, of prime importance that we be able to get the animal to perform the desired behavior so that we can “CLICK” the correct response and
REWARD” it. This can be done in two ways. Sometimes the most practical is to wait for the behavior to occur naturally and “CLICK” and “REWARD”. Other times it may be necessary to induce the behavior through lures and prompts and then “CLICK” and “REWARD”. For example, teaching a dog to sit: We can carefully watch the dog and “CLICK” and “REWARD” every time the dog sat. Soon the dog would be sitting on its own to induce the REWARD”. Reward each desired response without any voice or signal until the dog has learned the response. At this point we would introduce the “SIT” command just as the dog was in the process of sitting until the dog performs the behavior on command. Alternatively, we can lure and prompt the dog to sit. then “CLICK” and “REWARD”. With the dog in a standing position, hold a tasty tidbit at the tip of the dog’s nose and slowly move your hand upwards and backwards over the dog’s head without letting the dog have the tidbit. The clicker would be in your other hand. The dog’s nose will follow your hand so that its head goes up and back forcing the dog into a sitting position. “CLICK” and “REWARD”! If you cannot induce the dog to sit in this manner gently push down on the dog’s hind end (prompt) forcing it to sit. “CLICK” and “REWARD”! When you can lure the dog into the sitting position consistently, introduce the “SIT command as above. See the GENTLE LEADER® BOOKLET and our reading list for further and more advanced training.

ADVANTAGES OF USING A CLICKER:

1. lt accurately identifies the correct behavior precisely when it occurs.

2. It can be delivered from a distance.

3. It can be used by more than one person.

4. Its intensity is always the same.

5. It is not punishing and non-nagging.

6. It is fun for the dog and the trainer.

7. It is only used in training, it becomes a more salient stimulus than one’s voice.